August 9, 2019 – Nashville, TN – Kelsey Waldon is no stranger to calling it as she sees it. Over the years, her songs have been honest observations of real-life, in the trenches issues; small-town woes, prescription drug addiction, and all manners of heartbreak have been on Waldon’s chopping block.  Yesterday, Nylon premiered what may be Waldon’s most matter-of-fact, hitting close to home composition to date, “Sunday’s Children.” “Essentially, that tune was inspired by how I felt about people using religion and God in the name of hate,” Waldon told Nylon. “I grew up in the Southern Baptist church, and I was really discouraged to hear so many people instill fear in the hearts of people, that just because somebody isn’t like them, they would be afraid of this person.” “Sunday’s Children” comes as the second single from White Noise/White Lines following the previously released “Anyhow,” which Garden & Gun called a “fitting first taste of an album that should firmly establish Waldon as one of classic country’s rising torchbearers.” White Noise/White Lines will be released October 4th on John Prine’s Oh Boy Records.

“Sunday’s Children” can be heard here and White Noise/White Lines can be pre-ordered here. Visit https://www.ohboy.com/kelsey-waldon to snag the pre-order bundle which includes a digital download, cd, and vinyl—plus a limited edition 7” vinyl of The Kentucky Sessions, a collection of duets from Prine and Waldon. Head over to The Bitter Southerner to watch Waldon and Prine perform “Kentucky Means Paradise,” one of the tracks from The Kentucky Sessions.

In addition to the new single, Waldon just rolled out a number of previously unannounced tour dates. Waldon’s headlining tour will take place after a run of shows supporting John Prine on the west coast and includes stops in the midwest, a two-night stand in Waldon’s home state of Kentucky, a whirlwind week through the southeast, and a tour-ending run through Texas before she returns to Prine’s tour in December. A full list of tour dates can be found below.

Waldon recently found herself honored by one of her biggest influences and songwriting heroes, John Prine. White Noise/White Lines will be her first release on Prine’s own independent label, Oh Boy Records. As their first new artist signing in 15 years, Waldon doesn’t take the relationship with Prine and Oh Boy lightly. “It’s hard for me to put into words what it truly means to me to be signed to Oh Boy Records,” says Waldon.  “To have someone like John, who I have looked up to my whole life, who I have set my songwriting standards after and my general music-making standards after, to have someone like him endorse my music and care enough about it to make sure it reaches a wider audience…that means everything.” In June, Waldon joined Prine on stage in Manchester, TN, for his set at Bonnaroo Music and Arts Festival, dueting on “In Spite Of Ourselves” much to the delight of their Saturday evening crowd. 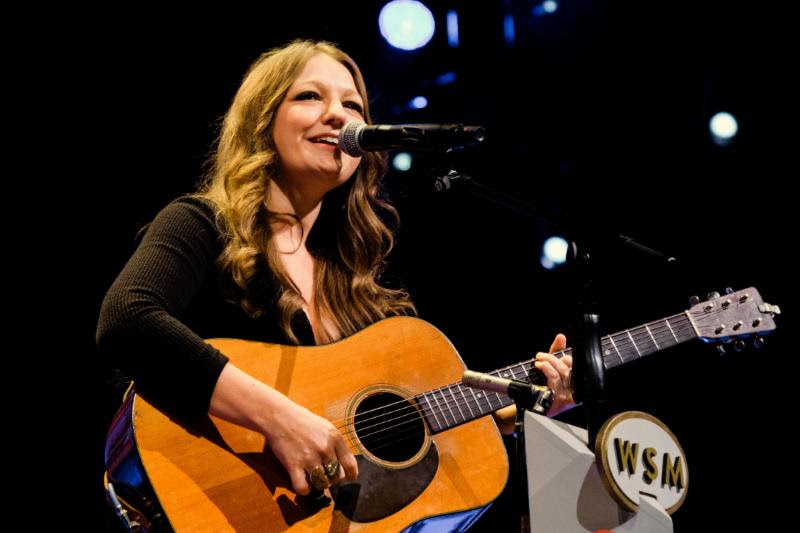 About Kelsey Waldon:
On her new album, White Noise/White Lines, Kelsey Waldon captures the rugged country sound of her touring band without sacrificing the intimacy of her songwriting. Waldon is native of Monkey’s Eyebrow, Kentucky, who took an interest in singing, songwriting and playing guitar as a child. After moving to Nashville, she cultivated a loyal following through frequent touring across the U.S. and two critically acclaimed albums; the most recent of which made it onto NPR’s Fresh Air host Ken Tucker’s “Top 10 Favorite Albums of 2016,” while the album’s lead single, “All By Myself,” was featured on NPR’s list of “Top 100 Songs of 2016.” Her persistence paid off when, on stage at the Grand Ole Opry, John Prine invited Kelsey to join his Oh Boy Records family. White Noise/White Lines will be released October 4th on Oh Boy Records.

In 1980, Prine finished his recording contract with Asylum and moved to Nashville. Rather than sign with another label, he decided to start one of his own, and was joined by Bunetta. The new Oh Boy label’s first release was a red vinyl Christmas single with Prine singing “I Saw Mommy Kissing Santa Claus” on the A-side and “Silver Bells” on the B-side. The first full-length release was Prine’s Aimless Love in 1984. Oh Boy is the second oldest artist-owned independent label in the country and the oldest in Nashville.

Kitchen In The Garden Hosts A Variety Of November Events